Today we’re going to be comparing the Anova Immersion circulators with PolyScience line of sous vide machines. Typically, the PolyScience line is regarded as a more professional grade machine. PolyScience has been around for quite a long time and has significant brand loyalty. This makes them one of the preferred machines in professional and home kitchens alike. In contrast, the Anova brand is a relative newcomer when it comes to sous vide cooking.  This is not to say the Anova lacks any of the cooking ability that the PolyScience machines possesses, it’s simply that PolyScience has been around longer. Indeed, the Anova has actually been a gateway machine, in that it has opened the door to sous vide cooking for a number of home chefs that otherwise would never have tried the technique. Both companies offer competent machines, but overall, as you’ll see, the Anova line generally offers a better value proposition when considering cost.

Biggest Difference Between PolyScience and Anova: Technology and Connectivity

This criticism becomes even more legitimate when you look at the actual technology available  between the two companies’ offerings. For example the Anova now offers touch screen LCD along with Bluetooth and Wi-Fi connectivity. So not only are the buttons and display of lower quality on the PolyScience line, the actual technology available to the end-user is greatly reduced on PolyScience machines when contrasted with Anova immersion circulators.

The PolyScience line simply lacks technical advancements like Wi-Fi and bluetooth. For some, these things may not matter, but if you’re a gadget hound, you should avoid PolyScience until they release a new model. In part, I’d like to credit this lack of technology to the PolyScience line being focused on making a more robust kitchen-grade machine and ignoring these extra non-essential bells and whistles. Those superfluous items that distract from the job at hand: great cooking. But if anything, I think it just shows that PolyScience may be bit behind the curve when it comes to consumer grade sous-vide machines. The modern technology, present in machines like the Anova, not only makes the them easier to use but also makes sous vide cooking more accessible to new chefs.

Both machines offer only one year limited warranties, so neither manufacturer has taken the opportunity to differentiate itself when it comes to standing behind its products.

Pros of the Anova Brand

Cons of the Anova Brand

Pros of the PolyScience Brand

Cons of the PolyScience Brand

When it comes to addressing the needs of the home enthusiast or the professional chef  Anova has actually made strides in creating machine that’s made of stainless steel, has a higher grade, and has the capacity to support large cooking projects. In contrast PolyScience simply hasn’t created a more consumer friendly machine that is built equally as well. While the pro-sumer and professional grade PolyScience machines can take on large jobs and produce great results time and time again, PolyScience hasn’t really created a lower end consumer model that performs as well as the Anova offering.

In short, if you want to pay for a professional machine PolyScience might be the better choice, but for entry-level or home use, Anova is superior given its lower cost. To that point, PolyScience really hasn’t made a consumer grade machine that is accessible to the home enthusiastic. Really, the only thing they’ve done is painted their “PolyScience Creative” machine yellow and rebranded it as the “PolyScience Discovery” and sold that as consumer grade. But for the price that you pay for the PolyScience name, you’re really not getting much more, or you’re actually getting less than some of the other offerings by Anova or Nomiku.

The PolyScience focuses on function over form, that’s clear with the basic utilitarian buttons on their machines and the lack of Wi-Fi, bluetooth, and a color screen. Given that these are not essential features to craft a perfectly cooked sous vide meal, these features may or may not be important to you. Now on to the individual offerings from each brand.

Now let’s turn to the specific machines that Anova offers. The ANOVA line has three main consumer products, the older touchscreen LCD model which I’m not going to spend a lot of time talking about since it is really isn’t being sold by many retailers anymore and the Wi-Fi and bluetooth models. While the original LCD model was a strong machine when it was first offered, it is since been phased out in favor of the Bluetooth and Wi-Fi models. In short, Anova offers three consumer-grade sous vide machines: the older LCD model, the bluetooth model, and the newest Wi-Fi + Bluetooth model.

Visual difference between the LCD and newer Wi-Fi Model 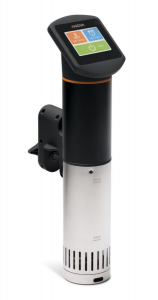 While the bluetooth version is a great machine, if you are a real gadget lover, it makes sense to pay the extra $20 to upgrade to the newest model which includes Wi-Fi connectivity in addition to bluetooth connectivity.

As far as  sous vide machines go the Anova line is hard to beat. For less than $200 you will get a machine that is connected, simple to use, and produces strong consistent results time after time. Certainly there are some limitations to the Anova machine related to large cooking jobs (you won’t be able to make 50 steaks at once) but in reality the similarly priced PolyScience machines won’t be able to tackle equally large jobs either. Further, the 800 Watts of power will lead to slightly slower water heating times but these are minor issues are offset by the value proposition this machine offers being so versatile at such a low cost. As you’ll see below, in contrast to all the PolyScience offerings, which start at minimum of $100 more, the Anova’s value proposition and its versatility are hard to beat.

Turning to the PolyScience line, the company gives you quite a few choices . Their entry level model is called the “Discovery.” This is the cheapest machine they sell, however, it will cost you $100 more than the Anova machine, that as we already discussed, has more options for connectivity in a slightly more user friendly package.

As for as what the Discovery line is capable of, the key things that I look at in evaluating a machine are the maximum water bath what the machine will support, and the pump volume, (basically how much water the pump can move per minute). In this case the discovery can handle 20 liters which is about five and a half gallons and it moves 6 liters a minute which is about a gallon and a half a minute. These are pretty standard numbers for entry level sous vide machines, in comparison the Anova moves a slightly higher 8 liters per minute and its total water capacity is comparable.

The next offering by PolyScience is their Creative Series which is meant to be the stop gap between the consumer-grade Discovery model, which is that hideous yellow color, and their professional line of sous-vide machines that run from 800 to $1,000 plus in price (see below). As, you can see the Creative Series is more attractive than its ugly-duckling cousin, the Discovery.

However the justification for the extra $100 for the Crative Series is hard to find given that the Creative offers the same 20 liter water capacity and the same 6 liter per minute water flow as the Discovery Series. The only real upgrade is that it provides 1100 Watts vs. the Discovery’s 750 Watts. In many respects, the Creative series is really just the Discovery Series in a black casing instead of that terrible yellow one. The Creative is just marketed as a higher-end model than the discovery. With nearly the same internal specifications as the Discovery, and a $100 higher price tag, of all the PolyScience machines the Creative is the one I find the hardest to recommend, especially considering at this price point you can find more feature rich and robust models from other manufacturers. The Creative has a higher pricetag but you’re paying a lot and not getting commensurate value. Let’s look at a PolyScience model that does offer more, the professional series.

The PolyScience Professional (chef) Series immersion circulator does offer a larger tank capacity, higher water flow rates, and a commensurate larger price tag. As I mentioned before this is the professional or ‘pro-sumer’ grade machine and it will cost you around $800, but for this added cost you get a much more robust machine at 1100 Watts that can handle a  30 liter or a gallon water bath and it moves 12 liters which is around 3.2 gallons per minute. Practically speaking, this means you can throw around twice the size of the job at this machine and it will have no problem handling it. So while this machine has the same wattage as the Creative Series, its pump is more powerful allowing it to cook in larger basins and circulate significantly more water.

This machine is larger weighing in at around nine pounds (compared to the discovery’s 5.5lbs and the Anova’s 2.5lbs). This added weight is a function of the Professional Series’ larger motor, propeller, and internal equipment to support those larger cooking jobs. There are actually two versions of the PolyScience Professional machine, one being the $800 plastic pro-sumer grade machine above, and the even higher graded and stainless steel model below.

This beauty will cost you $1,200 And has similar specifications to the other professional model as far as supporting an 8 gallon water bath and having a water flow rate of 3.2 gallons per minute.  Certainly I have to admit though that the stainless steel professional model is a gorgeous piece of equipment and will draw a lot of attention in your kitchen. You will have people asking you what it is and will be something that lasts a long time is reliable and will produce consistent results time and time again. But these machines are both 1100 watts–giving you same amount of power. Which, when contrasted with the Anova machine, with only 800 watts of power and the PolyScience Discovery machine which is only 750 watts, is a significant jump in raw power.  Regardless, however, it is hard to justify the extra $400 for the stainless steel classic PolyScience Professional Series machine, given that it has similar internal components to its lower-priced Professional Series counterpart.

In summary, both companies offer fantastic machines that will produce excellent results in the kitchen. if you’re someone who’s worked in professional kitchens for a long time you’re probably already familiar with the PolyScience line, and you’re more likely to buy PolyScience because of that familiarity. But if you’re looking for a budget machine that can handle most jobs, or you’re new to cooking, the Anova machine squarely beats the PolyScience offerings when you look at price.

Our top picks separated by budget and experience are:

Your choice will  depend on what you want out of your machine, the size of the cooking jobs you plan to throw at it, and whether or not the PolyScience brand name is important to you.

From a pure value proposition, the ANOVA machine is the better choice. It does everything the entry model PolyScience machine does, and more, and has better connectivity and is more user friendly for the home chef. But if you plan to cook large projects or want to invest in a machine that you can grow into, the PolyScience Professional series is probably your best choice out of this group.

You can also see some of our reviews of other sous vide machines, along with our comparison of the two most popular consumer-grade machines the Anova and the Nomiku. Don’t forget to buy the necessary accessories like a cooking basin and vacuum sealer. Finally, you should take a look at our recipes and our recommended sous vide cook books.