Sous vide cooking has become a significant part of the culinary discussion for professional and home chefs alike. This is in large part thanks to accessible and affordable machines like the Anova, Nomiku and Polyscience machines. We really like all three machines and any would make a great addition to your kitchen. However, there are some new contenders for at-home sous vide cooking that could become the go-to machines of the future. Today, we’re going to take a look at a few of the newest, and some yet-to-be-released machines that look promising.

Trends for Sous Vide Machines in 2016 – Advanced Technology and Features

A strong trend for sous vide machines is ease of use and connectivity. You’ll note below that many of the new and most-anticipated machines focus heavily on simplicity and technology. Comparing these machines to those that came out just a few years ago, you’ll note the new machines leverage interesting new technologies and provide more connectivity than prior machines have. As we discussed a few months ago, the mellow machine looks to have great promise because it allows for the cooling and heating of the water to allow for a more “hands off” approach to sous vide cooking. Potentially, allowing home cooks to remotely initiate the cooking process–think cooking from work with the push of a  button. The downside, however, of some of these machines is that they lack simple controls like knobs or buttons, and must be controlled by a smart device like a phone or a tablet. 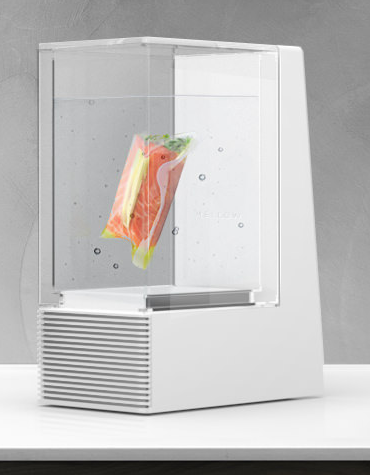 We’ve already taken a sneak peak in our pre-review of the mellow. No new information has come out since we posted about the Mellow before. It still heats and cools water and promises truly impressive connectivity. However, the Mellow has no way to be controlled manually, like the Joule below, you’ll need a smart device to control the Mellow. A big knock for those technophobes or people who simply prefer manual buttons. It also means, if you don’t have a Wi-Fi signal in your kitchen, or your smartphone dies, the Mellow turns into a useless water tank.

The pre-order price is $399 with only a $100 deposit required to lock-in your right to purchase a Mellow once it is released. But, if you use this link you can get $50 off the price of the Mellow bringing the price down to $349. 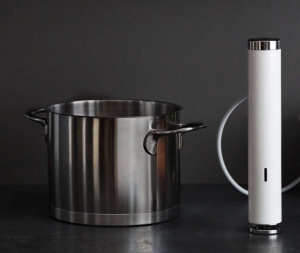 Chef Steps is a fantastic resources for awesome recipes and innovative sous vide preparation techniques. It was only a matter of time before Chef Steps stepped into the hardware market and produced a machine of its own. I tend to trust chef steps and assume this machine will be rock solid and offer great value.  As you can see, the specifications are impressive. 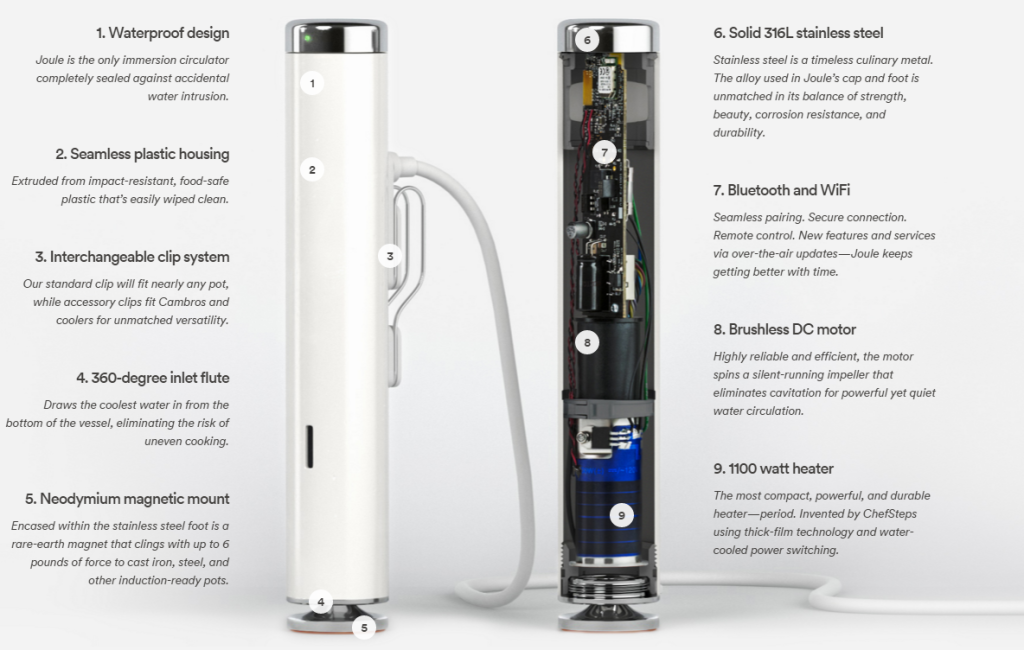 I particularly like the 1100 Watts of power and the strong base magnet for securing the machine to the bottom of metal pots and cooking vessels. However, one huge problem I see with the Joule is that it is too connected. It relies solely on a tablet or smartphone connected via Wi-Fi or Bluetooth for operation (better than the Mellow’s Wi-Fi only). That means if your phone is dead you can’t adjust the temperature or timer. I love high tech, and I love connectivity options, but there is something to be said about having the ability to manually control a machine’s settings. Also, I think for the less tech savvy home cook, the lack of manual controls could be a big turn off. Also the base magnet is rendered useless if you use a poly-carbonate basin like many chefs do. But, Chef Steps wisely included a side clip for that contingency.

Chef Steps has promised a great phone/tablet application to control the Joule and to import their recipes and cook times directly, which is a huge selling point in my opinion. If you are someone who enjoys clean simple design and always has a smart device handy this is probably your best bet for one of the newer sous vide machines. At the $229 pre-order price, the value is there given the Chef Steps brand.

Short description: Cheap entry-level machine for those not willing to break the bank to try sous vide cooking.

The Gourmia is the cheapest machine on this list and one of the cheapest sous vide machines we’ve ever seen. It has a very wallet friendly price of $129. It is a clip style immersion circulator similar to the Sansaire machine. Unlike the mellow and the Joule, the Gourmia sports no fancy connectivity options: it has two buttons and a click wheel. Period. That is it.

The utilitarian LED screen read out, and power buttons. The click wheel is on the front of the machine below the screen. Nothing fancy, but everything you need to get the job done. 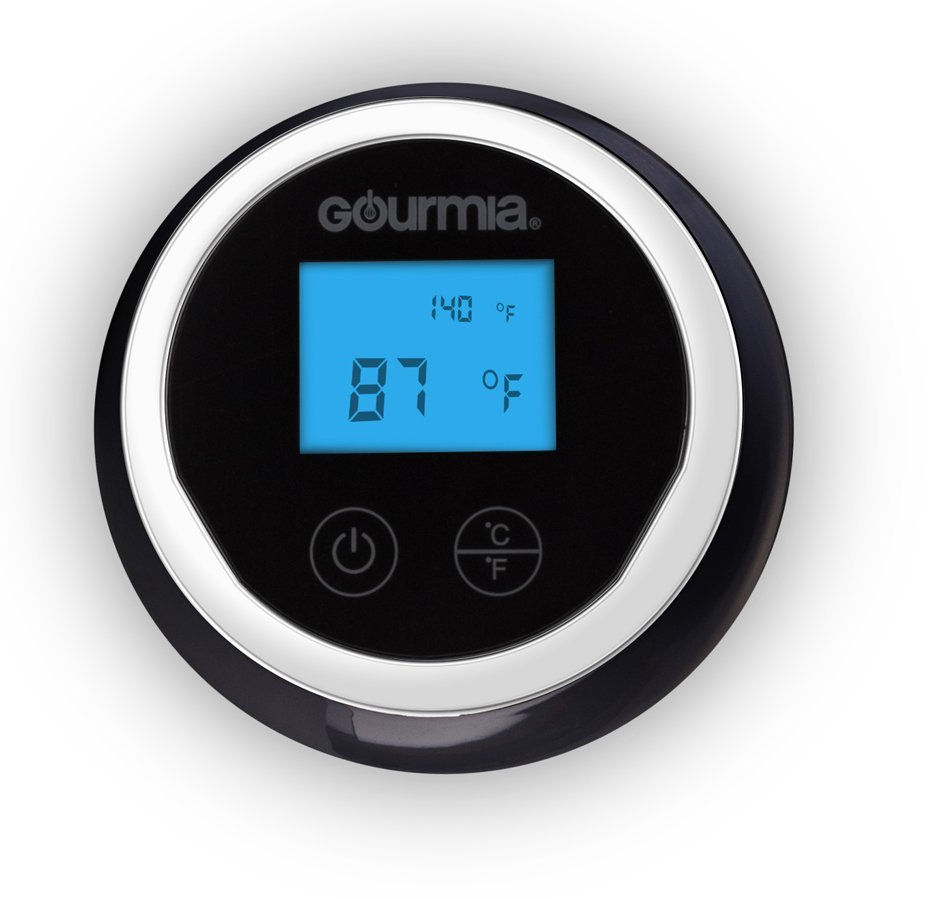 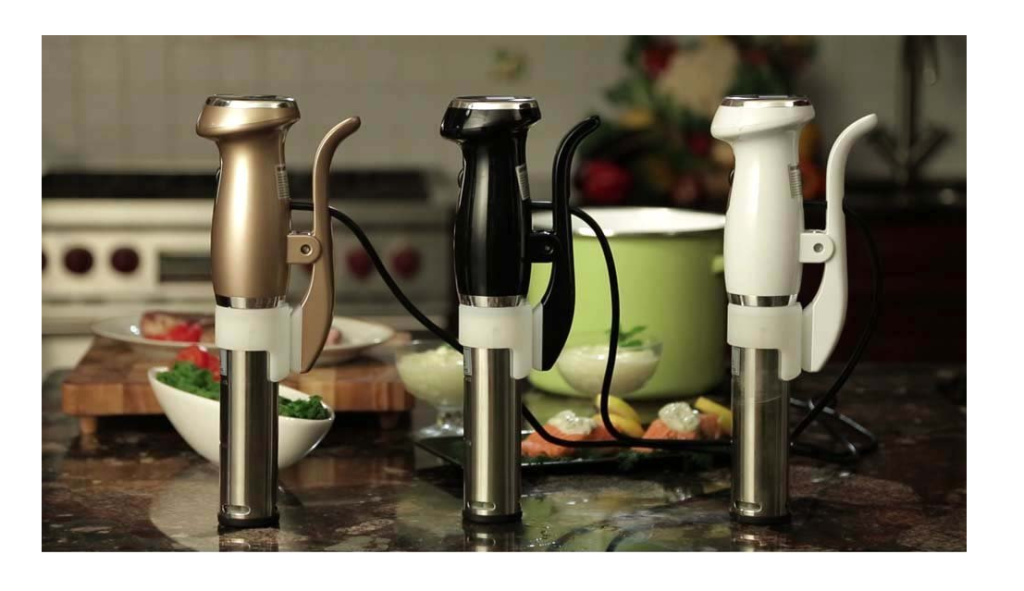 While the Gourmia is cheap, it certainly doesn’t lack in the power department, providing 1200 Watts, which is above average for sous vide machines–especially in this price range. It is hard not to recommend the Gourmia if you don’t need bluetooth/wifi and you want to get into sous vide cooking at minimal cost.

Short description: Intriguing machine that can use equipment you already have, but is it worth the hassle and cost?

The Codlo is an interesting idea but in practice seems costly and enigmatic. Basically, the Codlo unit is a power/temperature regulator that can be used in variety of vessels like a slow-cooker or rice-cooker. The Codlo has an attached heat probe to measure temperature and it adjusts the heat/power to the device based on your desired temperature. The Codlo claims to be compatible with a wide variety of machines from “rice cookers, slow cookers, [to] table top roasters.” You plug the Codlo into the wall, the machine into the Codlo and put the temperature sensor inside the machine. Then set your desired temperature and let Codlo do the work. 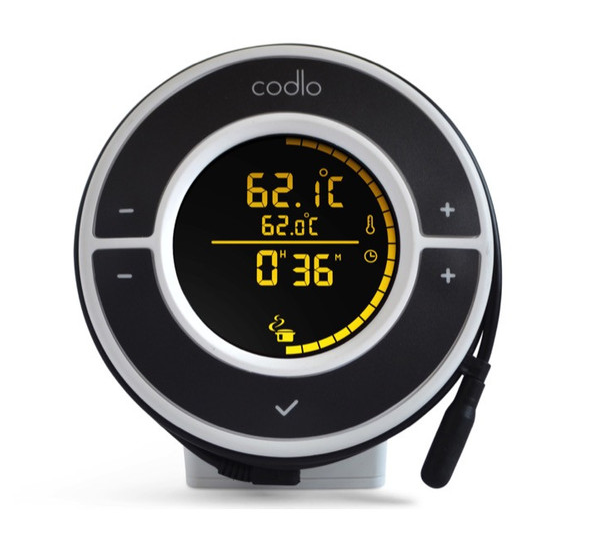 My main issue with the Codlo is that the unit costs around $179 but you still have to already own or purchase a compatible cooker with a heating element. Codlo sells their own branded rice cooker below for around $55 dollars. But for around $225 you can get a much better machine that is not limited to a certain cooking vessel and has greater connectivity. 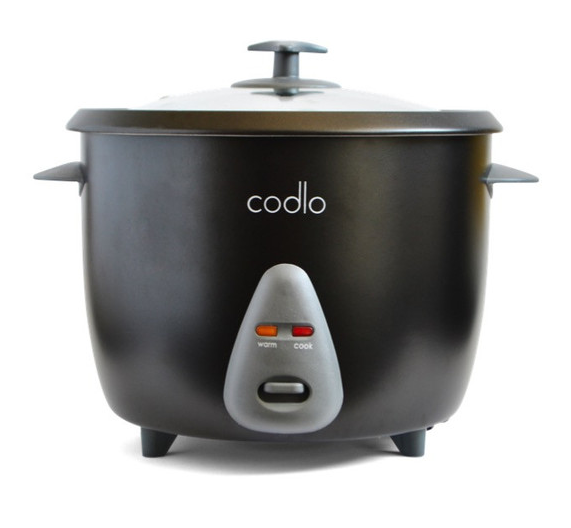 The counter-point in favor of the Codlo is that it is versatile and can work with a range of slow cookers and other heated cooking vessels. However given Codlo’s price point its hard to justify paying the cost of a really great immersion circulator for something that relies on another device to heat the water, additionally there is no water pump or circulator so depending on the vessel you are using you run the risk of hot spots or uneven cooking because the water is not moving.

Cost: $179 for the Controller then another ~$50 for their branded rice cooker or another similar appliance. 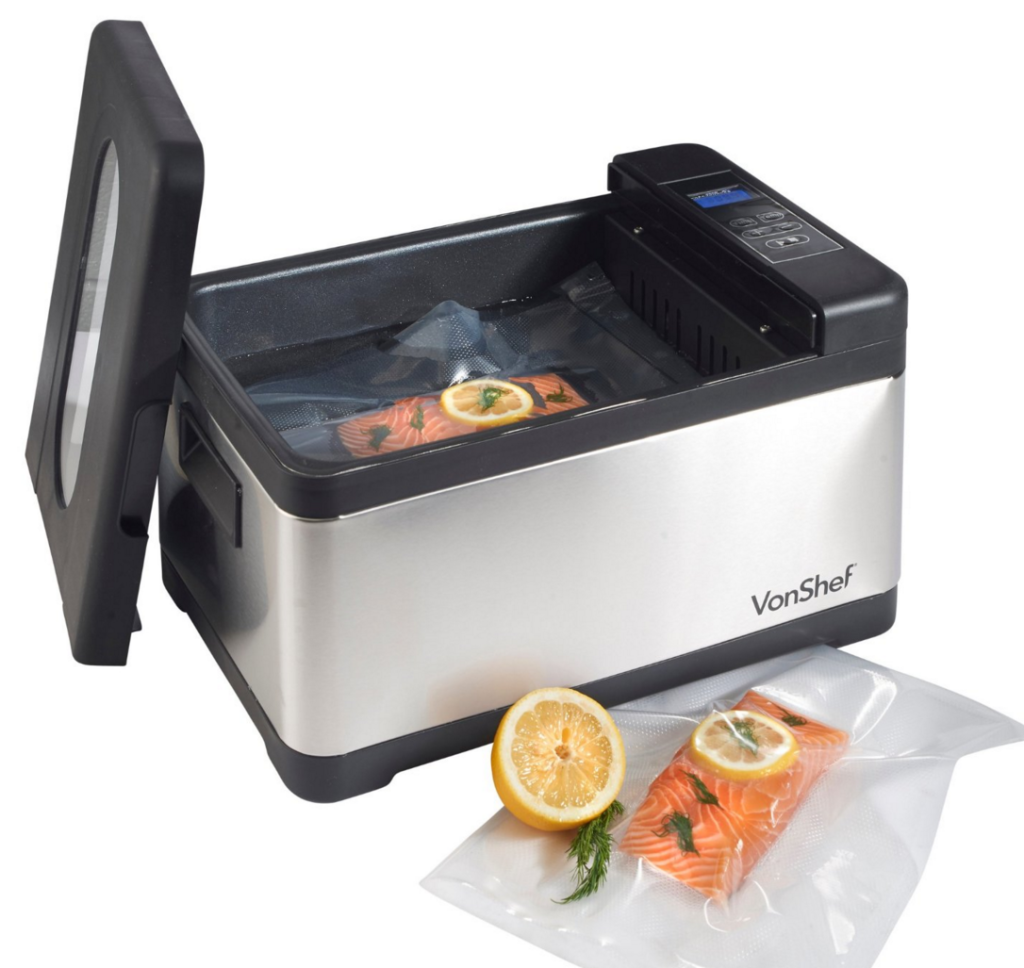 Here at SousVideReviews, we aren’t really high on fixed-water-basin cookers because it really limits the size of the cook job you can perform and they take up a bunch of counter space. This machine is in that category, but because of its basement level price of $119 it is hard to deny that it could be intriguing to some home chefs that like the idea of a simple, all-in-one basin cooking system. We note that it only provides 800 Watts of power, the water tank is limited to 8 liters (2.1 gallons). As far as counter space, it measures 15 inches x 10 inches x 9 inches. Initial reviews suggest it may have durability issues. For $10 more the Gourmia GSV-130 seems like the better option.

Conclusion — Our Picks of the Group 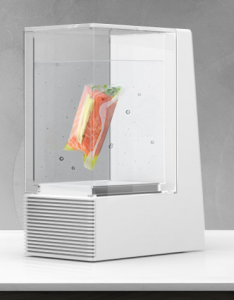 With the ability to cool and heat food, this device opens the door to remote preparation and food-safe storage. An aesthetically pleasing machine that looks like its from the future, we are interested to see if this machine can really deliver on its promise.

At $129 this is the lowest cost immersion circulator we have seen. Throw in 1200 Watts of power and it becomes even harder to deny there is some real value with the Gourmia. Only time will tell if it is built to last and is as durable as an Anova or PolyScience machine. Still, this is a great way to enter into the world of sous vide cooking.

That ends our Q1 2016 new sous vide machine round up. Feel free to comment below!